Back to Blog
A class action lawsuit was recently filed in New York’s Manhattan federal court against a large Fortune 100 insurance company “over its alleged policy and practice of denying jobs to qualified applicants on the basis of past arrests that never resulted in a conviction,” according to ClassAction.org.

The lawsuit cites violation of New York State Human Rights Law which provides protections to individuals based on arrest and conviction information. Specifically, employers may not inquire into or act upon adversely (i.e., make an adverse employment decision) arrest records that are not pending and did not result in a conviction unless specifically required by law.”

After a background check revealed arrest information, the plaintiff was told by the company’s Human Resources department to submit “all relevant court documentation and a written explanation regarding each criminal charge” by a specific date.  The Plaintiff submitted the requested information that confirmed the arrests had been resolved in her favor; however, the company withdrew its conditional offer of employment based on that arrest information.

The Plaintiff filed a complaint with New York State Division of Human Rights (the “DHR”), alleging that the company had unlawfully discriminated against her because of her arrest records. On December 3, 2020, a class action lawsuit was filed in federal court.

The lawsuit alleges that “as part of its routine policy and practice, [the company] inquires about and requires that applicants respond to questions about their criminal history—including arrest information—regardless of whether the arrest was resolved in the applicants’ favor” and “denies employment  to applicants with one or more arrests regardless of whether they were resolved in the applicant’s favor.” Furthermore, it addresses that this practice unfairly harms black job applicants stating that “a policy that screens for arrests, if allowed to continue, will continue to disproportionately impact the hiring prospects of Black applicants.”

In New York, there are several local ban the box laws and statewide laws employers should be cognizant of when conducting criminal background checks. In particular, this case brings to light compliance with New York State Human Rights Law. The lawsuit alleges that the company’s criminal history policy and practice violates the New York State Human Rights Law by: Employers should review their background screening policies and hiring practices to ensure compliance with New York State Human Rights Law and review the alleged violations above. Our 50 State Guide provides additional information for other laws in New York that restrict employers use of criminal history information including New York Corrections Law—Article 23-A and other local ban the box laws in cities like Buffalo and Rochester and Suffolk County.

Stay in-the-know of the ever-changing legal landscape of employment and hiring laws with our 50 State Guide. This guide covers everything from marijuana laws, credit check restrictions, ban the box, and more! Download the guide and keep up with compliance. 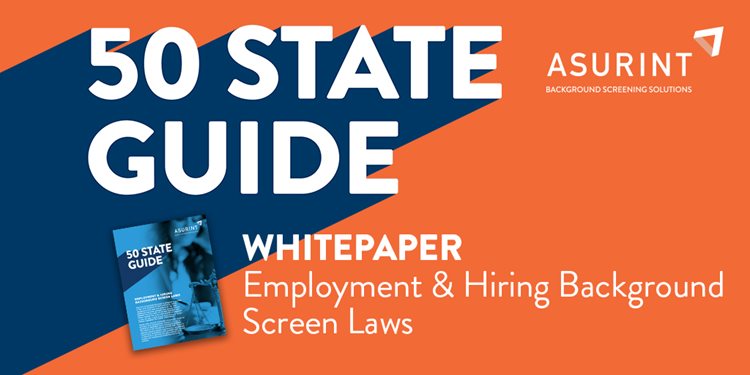