Employers in the United States are by now relatively well versed in the concept of Ban the Box. At the most basic level, this effort removes the criminal history question from an initial employment application until later in the hiring process.

However, the practice of criminal history inquiries is certainly not isolated to the US. Over the past several years, advocates in the United Kingdom have made numerous shows of support for a ban the box type law. While no law currently exists, the Business in the Community organization has encouraged UK employers to sign up to ban the box. On the topic of criminal disclosures, The Scottish Centre for Crime and Justice Research (SCCJR) recently issued a paper titled, Time for Policy Redemption: A Review of the Evidence on the Disclosure of Criminal Records.

In this research paper, the SCCJR analyzed “time to redemption” studies from numerous locations including the US, the UK and the Netherlands, which look at when those with criminal convictions become “statistically close to people without convictions in terms of risk”. From this analysis, the research paper found “in general after an average of 7-10 years without a new arrest or conviction, a person’s criminal record essentially loses its predictive value.” There are variations to this general conclusion for factors such as age, gender and crime type. Further, the SCCJR suggested that “asking people to declare convictions upfront may put people off applying for jobs whilst offering employers a false sense of security.”

The research paper closed with suggestions for reform approaches including revamping The Rehabilitation of Offenders Act 1974, creating a certificate of rehabilitation process and analysis of anti-discrimination legislation.

In addition to considering whether to ask an applicant about criminal history, employers in the UK must be cognizant of The Rehabilitation of Offenders Act 1974 (ROA). The ROA governs how long convictions will appear on a Basic Disclosure[1] before becoming spent (i.e., removed from the results returned to an employer). For example, an individual with a single, non-violent conviction will have that information removed from his/her Basic Disclosure following an eleven (11) year period.

Employers should also be aware of The Employment Practices Code published by the Information Commissioner’s Office (ICO) – the UK’s data protection authority. In this document, the ICO cautions employers to only consider convictions that are job-related and to not force a candidate to provide his/her criminal record.[2]

Employers should consult with qualified legal counsel when developing a background screening program in the UK to ensure various legal requirements and cultural norms are well understood. 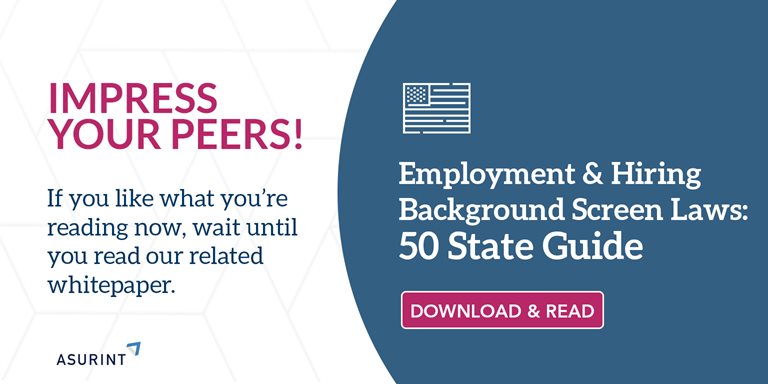 [1] As the name suggests, the Basic Disclosure is essentially the entry-level criminal record check available to employers. The search will return any convictions considered unspent under the Rehabilitation of Offenders Act (ROA). Employers in regulated industries and positions may be required to obtain a Standard or Enhanced Disclosure which includes information beyond the Basic Disclosure.

[2] This practice is referred to as “enforced subject access”. It is a violation of Section 5 of the Data Protection Act for a party, such as an employer, to force a data subject to provide his or her criminal record.